Meredith and Kevin are Engaged! - KatherineElginPhotography

Meredith and Kevin are Engaged!

I like to think that I've followed Meredith and Kevin from the beginning. The two met as editors at The Daily Princetonian, where the Photo desk and the Sports desk were next to each other. Perhaps that was fate.

Meredith and I were both photo editors, and Kevin a sports editor. I remember watching the relationship start to sparkle, and thinking that the two were great together.

Meredith is full of life, a giver, a beautiful human being from New Jersey who has gotten me through my fair share of tough times. Kevin is stalwart, a great thinker, and infinitely good-hearted. These two exude love, intelligence, and kindness, and so when Kevin texted me this week asking if we could "talk," I started to become giddy.

When we spoke on the phone, and Kevin told me of his plan – to travel from NYC to Meredith's home town to get the ring, and then to speak to her father, and then finally travel to Princeton on Saturday with Meredith – I was honored to be a part of it.

Under the guise of meeting me, Kevin and Meredith would make their way to fountain next the Woodrow Wilson School, the location of their first date. I would be hiding in the bushes, and photograph the moment Kevin dropped to one knee. 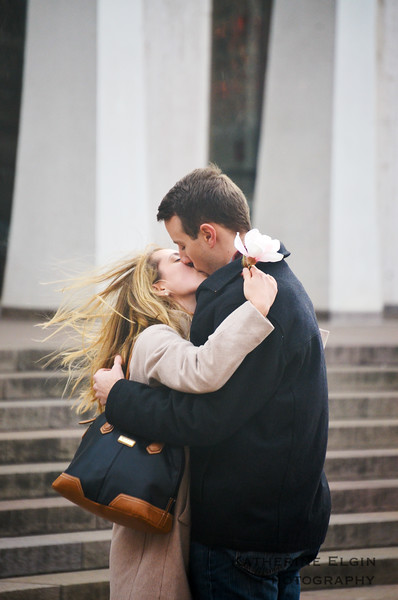 On the special day, I took my position in the bushes about 15 minutes before our scheduled meeting time. Kevin and I had discussed where exactly he should stand, and as I waited to see them coming towards me I began to live-text the event to two of our good friends.

Finally, I spotted Kevin and Meredith and go into ready-mode. These moments happen quickly, and you have to be ready!

Kevin brought with him two important items: First, a magnolia flower. Magnolia trees used to line the fountain, and apparently were in full bloom during their blossoming (ha?) romance. Second, the ring.

The ring, Meredith's mothers, was incredibly special. Meredith lost her incredible mother last year, and Meredith's grandmother (one of the most vivacious 90-something's I have ever met!) had held onto the piece of jewelry, waiting for Meredith to use it. It's a beautiful tribute to Meredith's mom.

It was a great honor to be a part of this big day for Meredith and Kevin. Their love is infectious, and I cannot wait to see what the future holds for them. I am so lucky to be able to call them my friends.